Autumn leaves for art and story-telling

It is Autumn in Melbourne, and the weather in the past week has definitely left Summer behind - even though the forecast for the next few days will make a liar out of me!

So thanks to a leaf template from Alphabet Glue, Volume Three, this week I made an Autumn tree for our pinboard - the same pinboard that was covered in this a year or so ago. 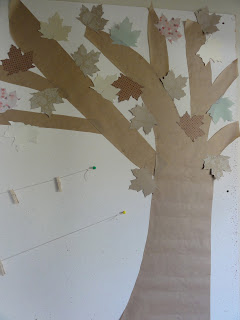 Sometimes it's fabulous to create a new project alongside the kids - other times it's great to put it all up and surprise them. This one was a surprise - the big kids came home one day from school and found this ... 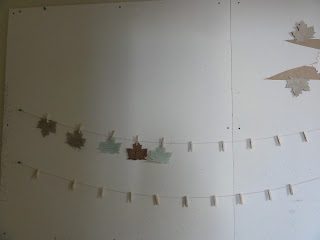 And then they promptly added their own touch to it - which was exactly what I wanted! 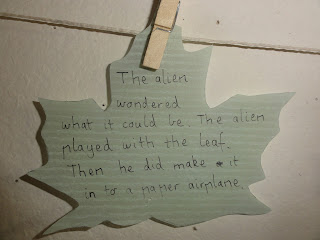 Annie at Alphabet Glue suggested using these leaf templates as bunting to showcase your child's story. I decided to use the leaves to create an ongoing story, written a leaf at a time, by anyone who felt like it. I used brown packaging paper for the tree and odd bits of scrapbook paper for the leaves. I pinned the blank leaves to the tree, and then used string and pegs to attach the 'story' leaves as they are written.

Our story so far includes a tree, an alien and a paper plane - who knows where it will finish?
Posted by Karen at 8:29 PM