Gentle readers, be warned, this is not a post about a book. Nevertheless, it is a story, the story of a boy and his sister, a sponge cake, a television show and that old adage, 'Practice makes perfect.'

Let me set the scene. The television show is Junior MasterChef. The sponge cake recipe is from Lucy, one of the young contestants. The action takes place in our kitchen, with the peeling cupboard doors and Scarlet, our red kitchen mixer. The boy, is of course, Tom, with his able assistant, Annalise. And gosh, did we practise this cake. 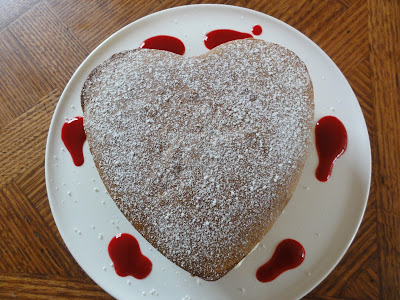 We cooked it three times in a week - the first time, just for fun. The second time, we baked it for Pop and Nana to say thank you. The third time, we cooked it for Uncle SP - it has to be the most feminine cake my brother has ever eaten for his birthday!

Each time we cooked it, the kids contributed a little more. This is what we learnt:

* Tom read the list of ingredients, Annalise put them on the bench - sibling communication and teamwork - got to love it!
* We mentioned fractions - 1/3 of a cup - I did say mention, way too early to explain them!
* Tom turned the oven on - 175 degrees is halfway between 150 degrees and 200 degrees.
* Annalise was mainly responsible for turning Scarlet on, which meant reading the numbers on the speed dial - pre-school numeracy.
* By the third cake, Tom had learnt to separate eggs, slice strawberries and turn a cake out of a tin. He also assembled this one with Annalise, while I washed the dishes. 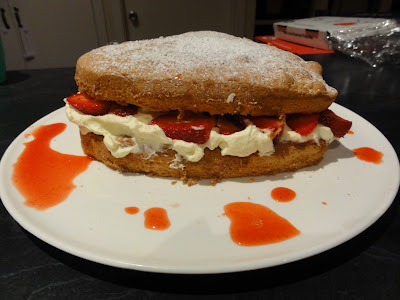 And as for me, I learnt to let go of my perfectionist tendencies. I certainly added the strawberry coulis swirls around the first plate as delicately as I could, but Tom decorated the next two plates. I sifted the icing sugar evenly over the first cake, but Annalise was in charge of the next two sprinklings.

And the moral of this story, gentle readers, is that a solo-baked cake in a clean kitchen is not as much fun as two proud kids with strawberry-stained clothes and cream around their mouths in a messy kitchen! Practice does make the imperfect perfect ...
Posted by Karen at 10:11 PM

Email ThisBlogThis!Share to TwitterShare to FacebookShare to Pinterest
Labels: cooking