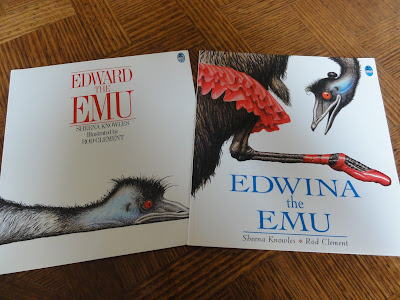 These zoo stories tick a lot of boxes for me - they make my kids laugh, the rhyming is phenomenal, they are fantastic read-aloud books and the illustrations are realistic and humorous.

"Edward the emu" by Sheena Knowles tells the story of a bored emu at the zoo who thinks the grass is greener on the other side of the fence - or cage - or enclosure. He hangs out with the lions, the snakes and the seals until he finally realises that being an emu is really the best, However, there is a surprise for Edward when he returns to his emu home. "Edwina the emu", also by Sheena Knowles, is the follow-up story, focusing on Edwina's attempts to find a job. It's probably worth reading Edward before Edwina if you can. 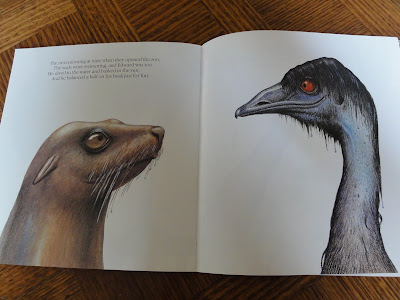 Humorous - well, have you ever heard of a bored emu, let along an emu attempting to emulate a lion or a seal? The picture are fabulous - look at how the illustrator, Rod Clement, has drawn Edward imitating the other animals. The matter-of-fact language plays up the humour -

Edward the emu was sick of the zoo,
There was nowhere to go, there was nothing to do,
And compared to the seals that lived right next door,
Well being an emu was frankly a bore.

Rhyming - the language is simple enough, but as a rhyme, it becomes a fast-paced action story.

'Yeek!' the man shouted, he seemed to be choking,
'An emu dance ballet? You've got to be joking!'
'I'm not,' said Edwina, 'but don't laugh at me,
I'll find the right job soon, you just wait and see.' 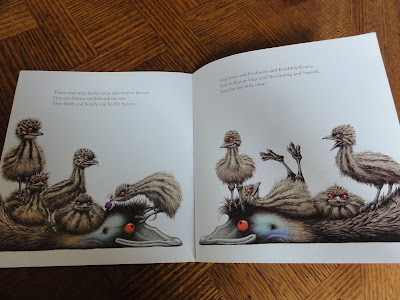 Reading aloud - as there's lots of conversations in both books, it's easy to read in an animated tone - try reading the two paragraphs above aloud. Besides, "Yeek!" is a wonderful word to say loudly!

Illustrations - these are a great contrast of realistic animals with animals in unusual situations. 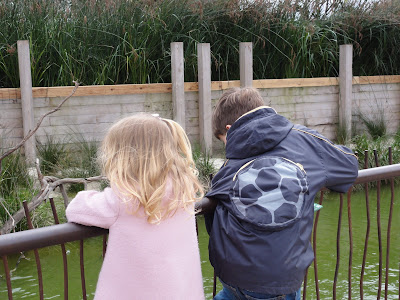 We found the seals at the zoo but although we looked carefully, we couldn't find Edward. Perhaps he was being a kangaroo for the day?
Posted by Karen at 9:20 PM