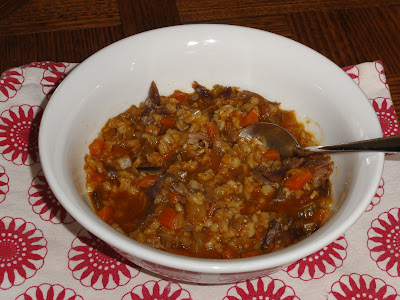 Soup for dinner. This version of lamb shank soup, really hearty and nourishing, was adapted from a Notebook magazine recipe.

Heat olive oil in a large, deep pot. Add lamb shanks and brown on all sides for about five minutes. Remove from the saucepan.
Add carrots, celery, onion, fennel and garlic and cook for three to four minutes, until the onion is soft.
Add the lamb shanks back into the pot. Add the stock and tomato paste.
Bring to the boil, then cover and simmer for two hours.
When the meat is falling off the bones, remove lamb shanks from the pot. Shred the meat and add back to the pot. Season with salt and pepper. Enjoy! 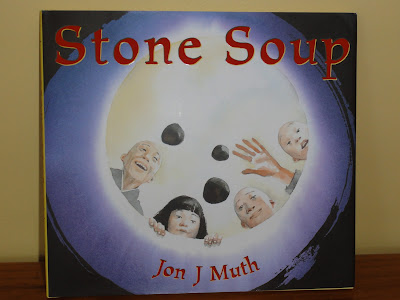 Like lamb shank soup, there are quite a few versions of this traditional story, “Stone Soup.” We have the Zen version by Jon J Muth, but there is also one where the fox makes the soup with the help of other animals and another which has a traveller as the soup maker and an old woman who finds all the vegetables. This Zen version doesn’t focus on the stone soup maker, out to gain some food, but rather tells the story of three Buddhist monks who wish to spread enlightenment. The author’s note provides a lot of detail about the origins of the story and the symbols he explored using a Buddhist story tradition.

Hok, Lok and Siew travel to a remote village in China, where the villagers are fearful and selfish.

“These people do not know happiness,” they all agreed.
“But today,” said Siew, his face as bright as the moon,” we will show them how to make stone soup.”

The soup begins with a stone, until the curious villagers begin to appear and gradually offer a vegetable or spice. 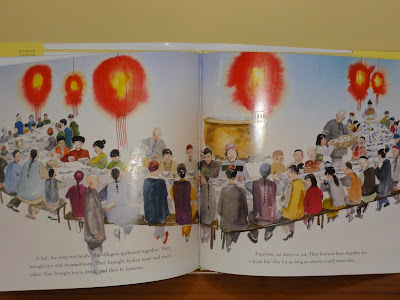 Siew took a taste. “The last time we had soup stones of this size and colour, carrots made the broth very sweet.”
“Carrots?” said a woman from the back. “I may have a few carrots! But just a few.”

“And to think,” said the monks, “to be happy is as simple as making stone soup.”
Posted by Karen at 9:16 PM