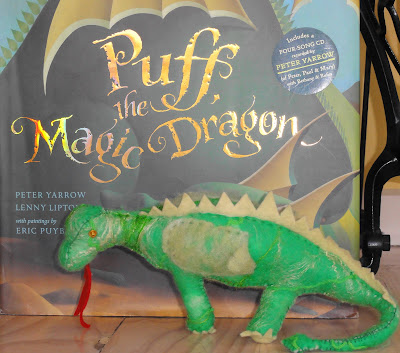 Everyone knows this one – “Puff the Magic Dragon”. It began as a poem written by Lenny Lipton, who passed it on to Peter Yarrow from the folk group Peter, Paul and Mary. They made it into a hit song in the sixties. Now it is a beautiful book, with illustrations by French artist Eric Puybaret and a CD sung by Peter with his daughter Bethany and accompanied by Rufus Cappadocia with his cello.

Peter describes Puff as – both childlike and wise, a king but also a willing follower of just about any bright spirit that inspired him. Puff gives his whole heart and soul to one special friend, Jackie Paper. And though it is terribly painful when Jackie grows up and has to leave, Puff has given Jackie the strength and courage he needs to believe in himself when he goes back to the real world.

You can really sense this through both the illustrations and the music. The pictures are gorgeous – acrylic paint on linen - Puff’s expression is so eloquent. The CD is lovely and gentle, and there are three other tracks, including “Froggie went a-courting”. 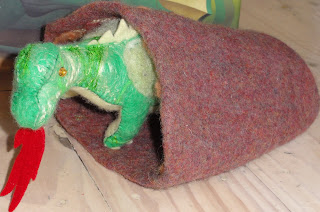 Tom’s interest in knights and therefore dragons led me to Puff. And then I found a great magical dragon felt kit from The Craft Circle. And then I found Puff’s cave at The Friendship Tree (which can also double as a mermaid cave!).

There is just something so whimsical about the combination of a frolicking dragon, an autumn mist, a billowed sail, painted wings and a cherry lane. Jackie Paper, why did you choose to grow up? You were on to such a good thing!
Posted by Karen at 7:43 PM