Men on the Moon 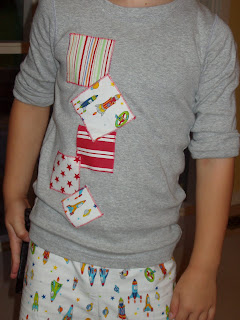 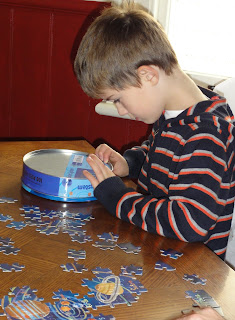 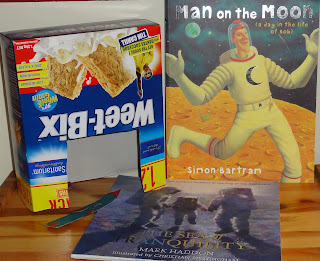 I suspect that an interest in space is a rite of passage for most small boys. Tom will make a space helmet out of a cereal box, draw 20 rockets over the course of a week, complete his solar system jigsaw puzzle and sleep contentedly in his handmade rocket pyjamas. Here are two of his favourite moon books.

Reading "Man on the Moon (a day in the life of Bob)" by Simon Bartram always makes me smile. The language is very matter-of-fact which contrasts with the idea of an ordinary man called Bob working an extraordinary job – as man on the moon.

He must make sure he leaves by a quarter to nine, otherwise he wouldn’t make it to the moon by nine. On the way he reads the newspaper and does the crossword.

The story describes a typical day for Bob, and behind all the ordinariness is the question of whether there really are aliens on the moon. Are there?

‘The Sea of Tranquility’ by Mark Haddon is a nice contrast to the previous book. Tom was lucky enough to receive this book as a birthday present from a school friend. It’s about a little boy, fascinated by the moon – he got an atlas of the moon for Christmas and he read it like a storybook. The boy watches two astronauts on television, the first two humans to stand on the moon, and dreams of walking with them.

And there they were, on the flickery screen, bouncing slowly through the dust in the Sea of Tranquility, like giants in slow motion.

The text is very detailed, naming craters and seas but it also has a wonderful dreamy quality about it, which is matched beautifully with the illustrations.
Posted by Karen at 6:06 AM