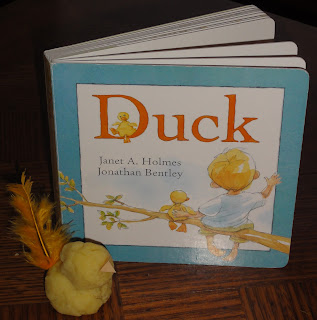 Most children have a special soft toy friend, and the boy in this story, “Duck”, is no exception. This is how the story begins -

This is Duck. Duck lives at my house. Duck thinks I’m the greatest. I’m Duck’s hero.

Of course, Duck goes everywhere with this little boy, until he is lost. When he is eventually found, this is how the little boy views his friend –

This is Duck. Duck lives at my house. I think Duck’s the greatest. Duck’s my hero. 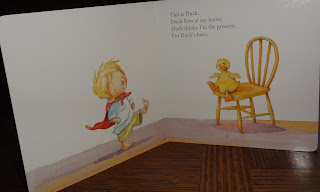 Note the confident swagger of the little boy on the first page – he’s taller than Duck and he’s wearing the red hero cape around his neck. Now look at Duck on the last page – the little boy is nowhere in sight, and Duck is wearing the red hero cape! A classic example of how the illustrator, in this case, Jonathan Bentley, has imagined what the writer, Janet A. Holmes, has not said but implied. 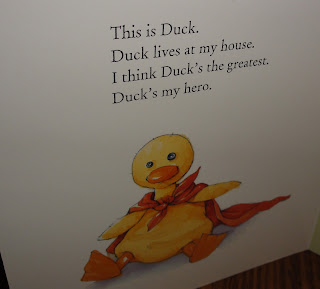 Thanks to Grandma for this activity – suitable for everyone! We followed the recipe for playdough on the cream of tartar tin. Because it is made using edible products, I didn’t worry too much when some of Joe’s lump of playdough mysteriously disappeared! 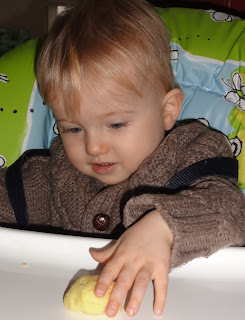 We drew duck feet and a beak on yellow cardboard and cut them out. The kids shaped two yellow playdough balls to make a duck body and head, then added the feet and beak, and then a yellow feather for the tail.

Singing “Three little ducks went out one day” seemed to be a mandatory part of the activity too!
Posted by Karen at 12:09 PM